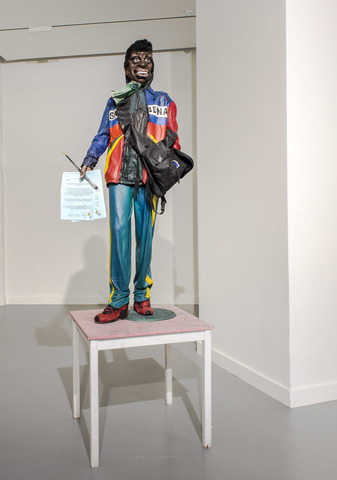 Around the turn of the century, the character Vlaamse Black appeared in Angel Vergara's oeuvre. The artist regularly takes on the role of this character who combines all the stereotypical characteristics of a black man: from black skin and thick lips to a hooded jogging suit and sneakers. Vlaamse Black usually shows up at openings of cultural events and distributes leaflets or gives speeches to a predominantly white audience. His presence fascinates, but at the same time evokes indignation, fear and even anger.

Vlaamse Black is, therefore, an outspoken political caricature. His seemingly subservient attitude can easily be interpreted as a form of protest. In this way, the character confronts the audience with his own hypocritical attitude towards the multicultural society. When Vlaamse Black takes the floor, he mumbles and is difficult to understand. As if the possibility of producing language and meaning was taken away from him. By explicitly departing from the norm, the work creates confusion and alienation.

In its cast form, Vlaamse Black (vogelvrij) also refers to the old tradition of painted sculpture, which derives its expressiveness and potential political charge from the tension between mirroring and distorting, between mimesis and expression. At the same time, Vlaamse Black (vogelvrij) focuses on being different and projects identities, stereotypical or otherwise, onto ourselves or the other. The double meaning of the word vogelvrij (fancy-free and outlawed) can also be found in the interplay of lightness and heaviness in the work. Perhaps Vlaamse Black (vogelvrij) wants to liberate us from the social and institutional structures that dominate our lives.