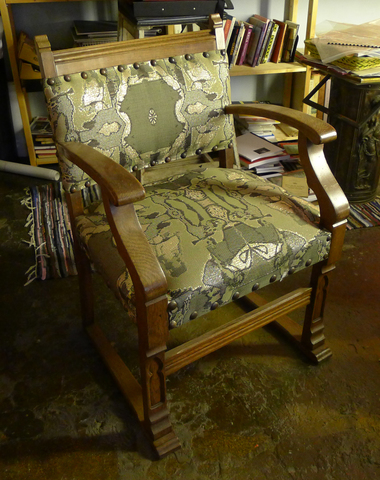 "I re-upholstered 2 armchairs and 4 plain chairs of my grandmother in fabric with HeadNurse imagery.

Charles Baudelaire shouts the 2nd half of the 19th century: "Le Satanisme a gagné!” and opens dead-tired the gates for Modernism as we know it. Simulteneously in North America Pragmatism is born, a materialistic philosophy of the New World of which Richard Rorty will become, in 1979, the most extreme beholder.

1915: in Moscow Suprematism started with The Black Square of Kazimir Malevitsj. At the same time in France-USA there is The Big Glass of Duchamp, transparent, double-sided, never finished. Broken, it became an icon.
1966: in New York  Barnett Newman shows: Who's afraid of Red, Yellow and Blue. Abstract Expressionism.
January 2004: in Ghent my interactive work Rorty The Headroom the last work of my HeadNurse-cycle, dealt with all these -isms, in particular with all the fearful esteems for symptotic spiritual creatures which mainly reflect wrong balanced organic structures.