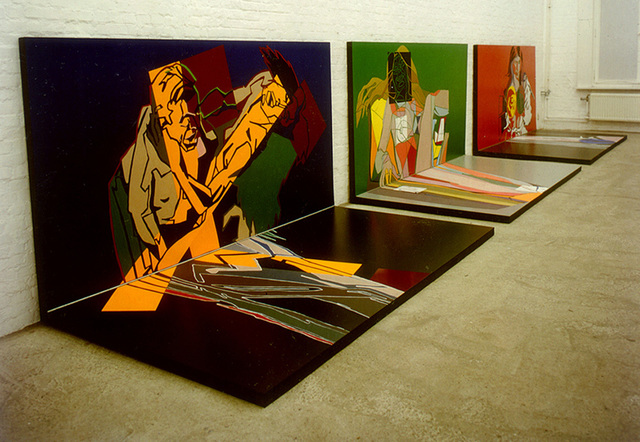 "This is a series of three works on PVC, each divided in two, the two parts connected by iron hinges, one part leaning against a wall, the second lying on the ground.

The first altar was made for the moon, the second for the sun and the third for the earth. The image of the moon altar is a woman offering her breasts, such as the Dea Nutrix in antiquity. She looks down. Her right breast is yellow, her left grey, referring to the moon that lightens up thanks to the projection of sunlight on its surface. The female figure standing on the sun altar stares at you from out of the negative, with golden hair, smiling, straight in your face. When you look into the sun, you become blind. On the third altar, there's a frolicking couple over which a swastika throws off its directions, becoming a cross.

The effigies are made in such a way that, standing at a certain spot before the work, they seem to come undone from their medium."