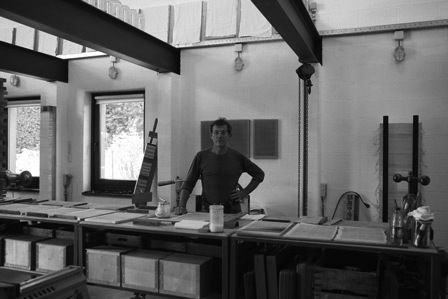 °1950
Born in Antwerp, BE
Lives in Prouvy, BE
Visit website

Denmark, whose real name is Marc Robbroeckx, was born in Antwerp in 1950 and studied art history at the University of Ghent from 1968 to 1972. After graduating, he was struck by the mass of books that had accumulated along the walls of his room, but which brought him no  proportional relief or knowledge. From then on, Denmark chose to tackle what he considers a crisis of representation: on the one hand the flow of information, although excessive, does not offer him a satisfactory access to reality, while on the other hand the evolution of one's own thought does not follow the rhythm of the de-multiplication of this information. Faced with out-of-control abundance, he took a turn and became an ‘archivist artist’.

A long-term work began. Tired of being over-stimulated, Denmark considered that "what you don’t know doesn’t hurt you" and, taking the term ‘press’ literally, tried to reduce the colossal volume of publications: against mass production of ‘wasted’ paper, the thing to do was slicing, grinding, pulverising. After destruction, it was time for Denmark to rebuild. Since the 1970s, he has systematically transformed publications into objects. With the care of a taxonomist, he avoids ‘useless’ writings and, ritually repeating the same gestures (gluing, compressing, binding, etc.) confronts industrial production with his craftsmanship.

Denmark's work has been associated with movements, which since the 1960s have included industrial and everyday production in art, such as Pop Art or New Realism. By making works from magazines and other cheap publications, the artist could also be linked to the Arte Povera movement, which in the Italy of the 1960s proposed a critique of society on the basis of poor materials. By using self-criticism as a material, however, he distinguishes himself from other movements: convinced that truth is relative, Denmark also calls for reflection through self-mockery. Not a verbal mockery, but a concrete and materialised one: Denmark who is against the accumulation archives himself. He has been filing archives for some forty years, until he has filed the archive files, thus ‘archives³’ (cubed). Finally, his meticulous and repetitive operations recall, not without irony, the work of Coptic monks.

Denmark
Do it yourself, shooting gallery for the art lover, 1985