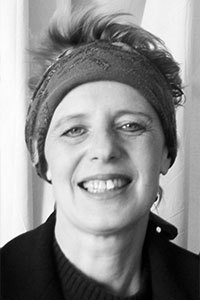 Johanna Kandl (°1954) studied painting in Vienna and Belgrade. Kandl, who regularly collaborates with her partner Helmut Kandl, often researches the outermost edges of the European Union and the neighbouring 'others'. She was one of the first artists in Austria to react to the transformations that followed the globalisation after 1989 in East and South East Europe.

Kandl works with a wide range of media, but her photographic and cinematic praxis is commonly influenced by her sensitivity as a painter. These links between genres and techniques are visible in her large-scale paintings, resembling monumental enlarged stills from television, portraits that often document the barren conditions of daily life in the rapidly changing political constellations of the former Soviet satellite states and elsewhere.

Kandl academically combines the tradition of historical painting with the bleak reality of the late twentieth and early twenty-first century as reflected by the mass media. By exposing contrasts, such as between the poignant poverty in the former Soviet Bloc and the flashy lifestyle of those who had a good deal thanks to the New Capitalism, she ask who benefits from who, and how, and why? What larger structures are driving this and how can it be deciphered?

“I like to imagine stories in which events could have – or have taken a different turn …” – Johanna Kandl, 2012