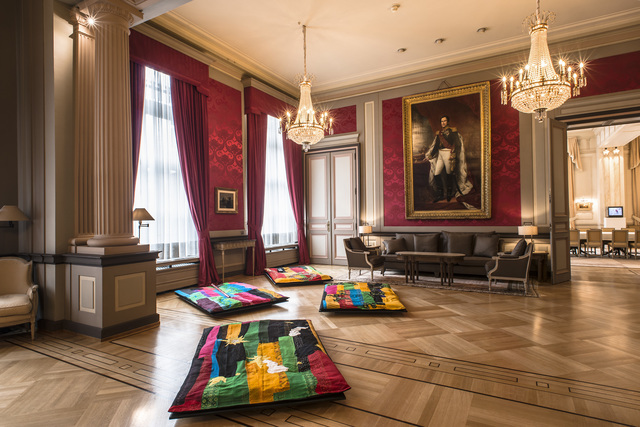 The work Down Under consists of four patchwork quilt covers that the artist bought 30 years ago. These were made by poor women who used the bits and pieces discarded by the Textile Mills of Gujarat. The quilts were primarily bought for their bold colour collages as much as for the rawness and rudimentary nature of their making. 30 Years later the patches of colours appliquéd upon with other printed textiles gains other readings, especially the political. One quilt cover now stuffed with a quilt has a garland of flowers appliquéd on to it like a mourning offering to a person lying beneath it perhaps, while a rectangular piece of polished black granite resembling a tombstone sinks into the soft thickness of the quilt, denting its surface. Another has remnants of cut fabric, abstract and irregular, appliquéd on to it.A crude metal bowl lies next it with bits of metal that seemingly appear like coins in a beggar's bowl. The third has comic strip motifs of explosions, smoke clouds, as seen from above, appliquéd on to it with a paper plane lying beside it on the floor, like a parody of war in a child’s room. In the fourth the entire quilt doubles as a landscape as seen from an aeroplane. The existing blue patches of the quilt cover appear like water bodies interconnected by appliquéd blue cloth, canals meandering by green fields. Existing red rectangular patches become fluid and organic, disturbing the seeming pastoral scene. Though only a meter long, a plumbing pipe with remnants of red paint on it lies heavily on this scene, innocuous but threatening as a tool of attack. Playing with the idea of scale and position of the viewer and of the seen, the pipe could become a pipeline in a large geographic area, signifying other levels of political and economic violence.