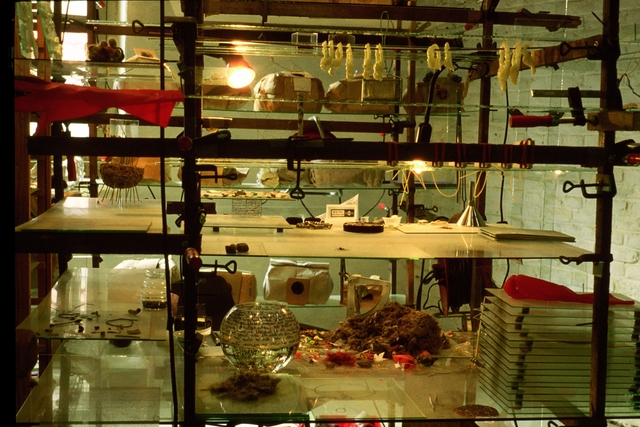 Suchan Kinoshita’s multi-cultural and multi-disciplinary background makes her well prepared for the hybrid art practice she has been developing for almost two decades. Staubstelle can be regarded as a laboratory where viewers can look at and experience things. It is, as always, about time and space. Space is made tangible through the arrangement of the exhibited objects, while time is made visible through, for instance, the use of screw terminals, which make quick mutations of form possible. Also the vacuum cleaner bags in the installation refer to the temporal: the dust inside is testimony of previous events and past states of being. The association with the belief, deeply held in our culture, that everything will turn into dust in end gives a more profound layer of meaning to Staubstelle. Other objects can also be seen as traces of incidents in the past. The ball of wool may previously have been a sweater. The emphasis that Kinoshita puts on the experience of time and space is to do with the fact that she grew up between two cultures and became aware of how differently different people relate to things we are tempted to regard as universal. In European culture space is mostly seen in relation to matter, whereas time is predominantly associated with the spiritual. Japanese culture sees neither body and soul nor space and time as opposed, but as complementary. Staubstelle allows us to see the materiality of time and the spirituality of space.