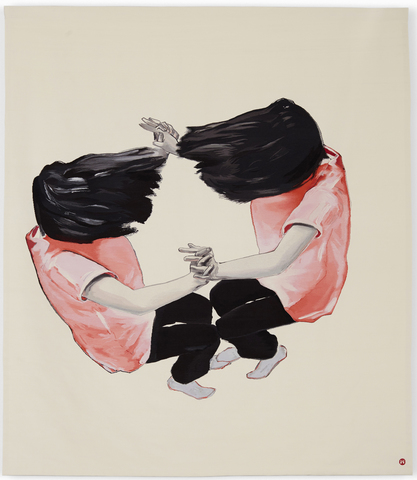 Réfractaire is a tapestry made within the framework of the partnership between the BPS22 and the Crecit[1] tapestry weaving workshops in Tournai. The work depicts a teenager falling to her knees, her hands intertwined with those of her reflection. The young girl, whose face remains hidden, conveys an image of femininity caught between pain and melancholy, combined with the violence of an identity stuck between two life phases. In a palette dominated by pale gray and pink tones, on a monochrome background and in a composition that suggests movement, like a still image, the figure seems to begin a struggle with the illusion of pictorial space.

Refuting any attempt at an explicit discourse on femininity, Charlotte Beaudry seeks to avoid the traps of the painted image and implicitly attracts the viewer's attention to what is hidden as well as to what is shown. “To reduce the appearance, to limit the reality to the features that one wants to show is inevitably pictorial. The fact of removing the details in favour of a silhouette or, even more blatantly, of framing an image can make what is removed or concealed as significant as what is shown. [...] Showing something in painting generates infinite graphic possibilities, including showing the painting itself” [2].