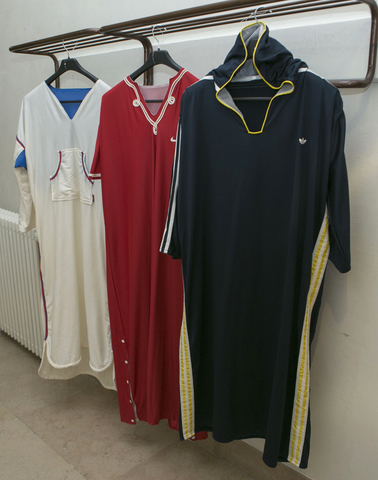 The set of three djellabas by the artist celebrate the attire of Berber origin, very widespread in the Maghreb countries. The djellaba, a long tunic, sometimes with a hood, is exported to Europe and mingles with the habits and customs of Western fashion. In his work François Curlet performs a synthesis of this phenomenon by applying sports brand logos to the traditional clothing. The tunics are presented on mannequins, the usual object present in shop windows; they are made of synthetic material and sport the typical zips of sportswear outfits, which became popular in the 80s with the Hip Hop movement. The artist brings together the characteristics of the djellaba with those of sportswear in a single object, both attires appreciated for their comfort.

The explanatory leaflet of the item specifies that it is a “generational superposition of the Muslim communities: association of traditional clothes and brand sportswear"[1]. The formal device put in place and the identity-based sense of belonging of a youth that oscillates between two cultures are juxtaposed. François Curlet’s djellabas testify to the feeling of non-belonging of a whole generation that does not recognise itself in the model of the country of origin nor in the society in which it tries to exist. This duality, translated with humour by the artist, highlights the need to invent new forms of belonging, compatible and appropriate to sociocultural transformations. François Curlet thus tries to solve a paradox by bringing together signs and forms anchored in both traditional culture and Western consumer society.