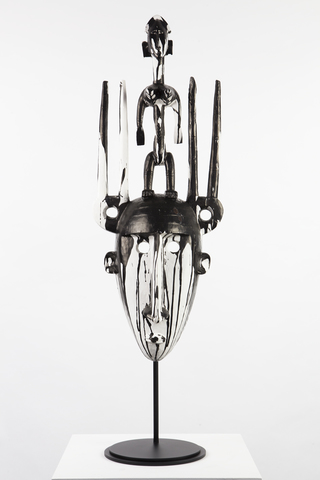 In general Geers tackles moral and political issues through his works, while critically reflecting on the context of art, its modes of exhibition, on the artistic institution and its actors. For example, in the early 1990s, he criticised the museum ideology, exploding the rails of several of them, offering only holes in the walls and heaps of debris. More recently, works emphasise the materialism of Western art, controlled by an increasingly powerful art market and major international events. Thus, the work presented in the exhibition combine traditional African sculptures and pictorial interventions inherited from the Western modernist tradition. This mobilisation of African magic and western pictorial rituals aims to restore art to its subversive force, to make it reinvest a speculative field beyond the visible.