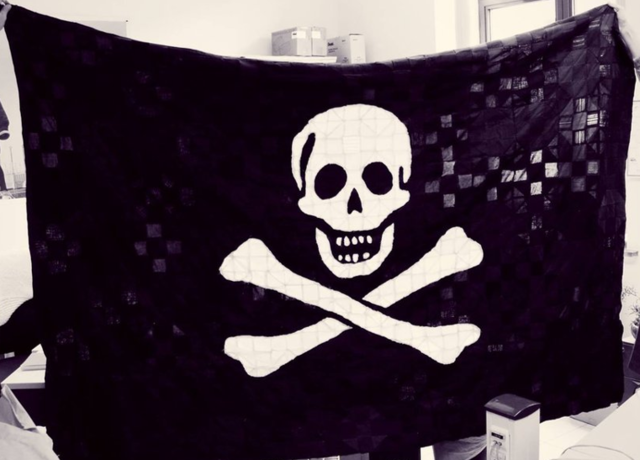 In SUPERDEMOCRACY the pirate flag floats among other flags, diverting this symbol of the nation-states into a plurality of individual proposals. Thierry Verbeke’s flag is made of a patchwork of black cloth, of course marked with the skull with the crossed bones of the famous Jolly Roger. With this work, the artist blurs two sociocultural references by associating them: the first, that of patchwork, traditionally associated with a typically feminine mode of expression, a classic notably in working-class women’s leisure associations (2); and the second, that of the historic-mythical piracy, which recalls, after the writings of the celebrated English historian Christopher Hill, that piracy can also be understood as an ‘inverted world’; an attempt to establish a more egalitarian counter-society than that in which sailors lived, a hope of establishing what was at the time a democratic utopia (Eleutheria, Libertalia, etc.). The work thus links two systems of social organizations, leading to fruitful exchanges between them, generating questions which, the artist hopes, can lead to ‘collective awareness’.