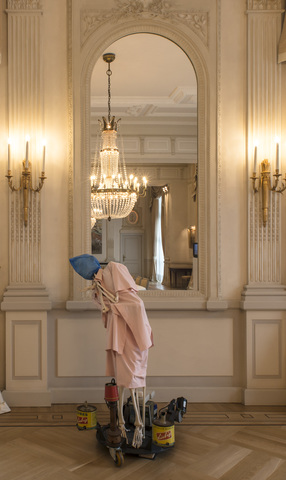 The two moving parts are skeletons[1] with the face of the artist. They evoke the prisoners accused of genocide in Rwanda, recognisable by their pink clothes. The colour is imposed but it is up to the families to provide the clothes; thus the social differences are perceptible according to the colour, the wear and the quality of the fabrics. The skeletons, meanwhile, abolish the origins since the bones are white for all. In Plus d’Opium pour le peuple the plastic bag on the head of the skeleton refers to the Khmer Rouge who choked their victims to death to save bullets. Atlas is a hunchbacked scout who carries the world and whose accessories refer to the prison capos in Congo. These skeletons question both death and the cycle of life.