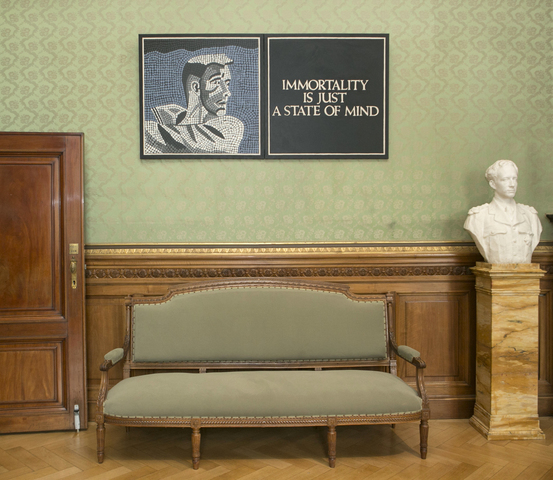 Immortality Is Just a State of Mind, 1987

The diptych Immortality is Just a State of Mind was created on the return of the artist's trip to Moscow. It consists of a masculine figure, inspired by that of the heroic sailor depicted in the foreground of the painting La Défense de Sébastopol (1942) by the painter Alexandre Deïneka (1899-1969). Executed by Jean-François Octave in the illusion of a mosaic, the work refers to the monumental achievements of this Soviet painter, including that of the Mayakovskaya metro station in Moscow. A senestre, the sentence of the title is painted in capital letters, as an authoritative advertising slogan; it is derived from the famous song Just an Illusion, from the post-disco group Imagination, released in 1982, which was a planetary success.

Emblematic of Octave's work, the work mixes references that are ideologically opposed: on the one hand, the hero-like staging of the defenders of Sevastopol against the Nazi invasion, in the classical register of Socialist Realism and, on the other hand, the apparent lightness of the pop reference, an illustration of capitalism exploiting all the stages of mass entertainment for commercial purposes; even though it contains forms of subversion (the disco subculture being the first ostensible stage for homosexuality). The artist also highlights the eroticism of this young man with a muscular body, emphasising that the working man’s imagery by Socialist Realism exudes a certain (homo) sexual idealisation of the male body. This (homo)sexual idealisation is also one of the powers behind disco music... By associating these two opposing ideological conceptions, Jean-François Octave emphasises the same use of the sexual realm, on both sides of the old iron curtain.