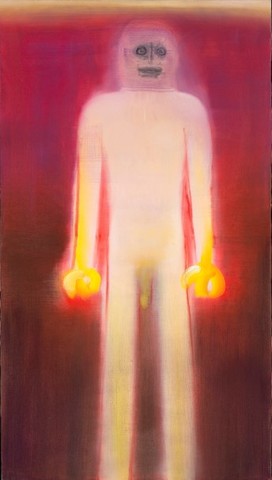 Nach Diane Arbus is an oil on canvas dating to 2012. The raw and vaporous side of the figure is accentuated by the lack of details of the male body. On the pale body with yellow and green reflections, two breasts or pectorals, in matching tones, are hidden. The face takes on the appearance of a mask and the palest streaks of paint suggest hair. The artist deliberately painted a kind of half-man, half-woman being, a semi-monster, which one cannot identify without the genitals. Hereby, Cahn refuses the sexualisation of her characters. She has no intention of making a distinction between men and women. Nach Diane Arbus means ‘after Diane Arbus’. If we compare the works of the two artists, we find in Arbus a resolve to photograph strange and almost unreal people and make them sometimes inhuman. The influence of the photographer is most certainly found in the character painted by Cahn.