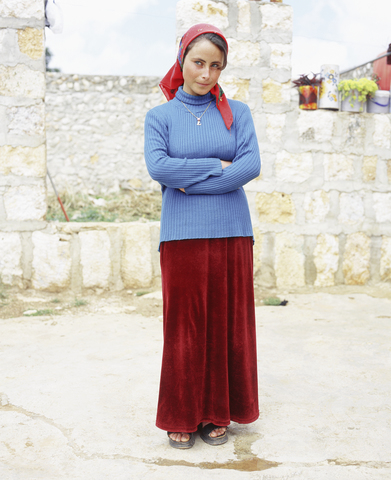 Willi Filz composed this series some ten years before the civil war, which has been devastating Syria since 2011. If, at the time of its realisation, the artist aimed at identifying human beings in all their diversity, outside of all judgment, and taking the portrait of a society without imposing any political content, today this work bears an extra weight.

Filz's work oscillates between commitment and withdrawal; sometimes this ambivalence sticks to his work for unexpected reasons, as in the case of this Syrian series, sometimes it seems provoked by the artist himself. Indeed, if his photographic series present unknowns, these are sometimes chosen in places bearing a strong symbolic significance, such as the migratory frontier in Morocco (in the series Des hommes dans le Nulle Part). The photographer, through the image, deals with a problematic reality without being openly positioned about the issue. In ambiguity, only one position is clear: a plea in favour of humanity.

Filz describes his work as ‘a visual exercise’. The ‘exercise’ lies in the quest for an ‘authentic’ identity that must be seized and, at the same time, in the vigilance not to impose the very idea of ​​identity on the women and men he is, through his lens, freeing from a peremptory judgment.