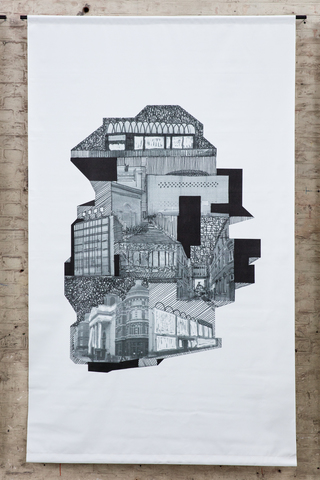 In the series Ane(c)dote (2009), created during a residence in Charleroi initiated by the association Incise, she plays on the flat surfaces and the depth of field, misleading the observer through the superposition of broken elements. These ‘subjective maps’ of the city of Charleroi are only fragments of transcriptions, more or less faithful of the reality of the urban landscape. The artist projects her own vision, enriched over the course of her discoveries and encounters by what her discussion partners have divulged or told her. It combines scattered elements connecting fragments that are geographically, sociologically or historically distant into a kaleidoscopic vision that favors the diversity of points of view rather than the exclusive perspective of an omniscient viewer.

This methodological and technical choice goes beyond the mere formal stake. It is, and must also be understood as a new proposal for the symbolic representation of the City. More complex, less rigid and especially distributed in a less precise way than single-focus images, Mira Sanders’s drawings confront within the same image situations that are different, opposed or conflicting. What is deliberately out of scope or in the periphery of classical architectural design, or what is traditionally dedicated to evocation or suggestion (at best), or even to omission or negation (at the worst), must now coexist in one single image.

The compositions of Mira Sanders thus overturn the hierarchical notions of the perspective system, which organises architectural drawing. The symbolic distribution between the foreground and the background, the centre and its periphery, the main activities and those that are anecdotal or even decorative, is completely questioned by the break-up of points of view. Her drawings no longer organize reality in terms of escape routes, which are condensed in the sole point of view of its author —who, symbolically, is that of the central power— but according to the diversity of points of view that make up the city. They dissolve the single meaning into a excess of possible ‘misinterpretations’.