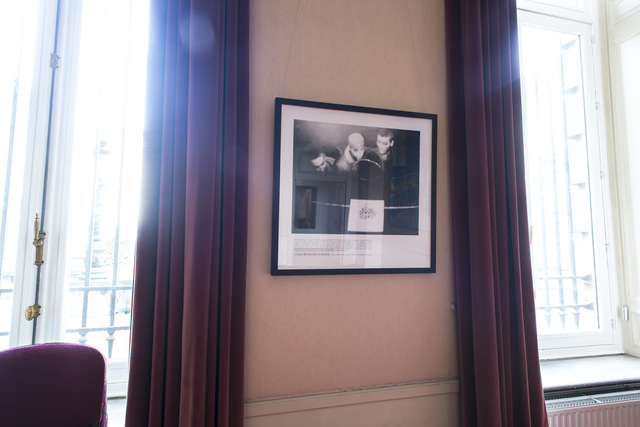 A blurred black and white photo shows three men avidly looking at a pile of money in a showcase waiting to be grabbed through the circular hole cut out in the glass. It is a still picture of a recording by a surveillance camera. Below the image, a text is displayed that gives the viewer the exact context of the event and a word of gratitude by the artist to the three men.

Vaast Colson made the circular hole with an exact diameter of 25 centimeters in the showroom of the exhibition space 'Looking Glass window gallery' in the Dansaertstraat in Brussels. The name of the gallery refers to the fact that it is not accessible to the public. It's actually an exhibition display window. The artist thus tried to find a way to attract the attention of passers-by.

Vaast Colson filled the hole in the window using a balloon. The actual sculpture that was right behind the window was made of 500 one-euro coins stacked on a pedestal. With the money sculpture, he challenged the spectator: “Do you dare pop the balloon and take the money?”

The three men who are featured in the picture, as described in the text, took action. The time and hence the title of the work were subsequently determined by them.

This event directly highlights an important element in the work of Vaast Colson, namely the involvement of third parties. He experiences the interaction and presence of an audience as something important. The action, in this case taking the money, is often the focus of the artist. The picture is a souvenir: a remnant of the action.