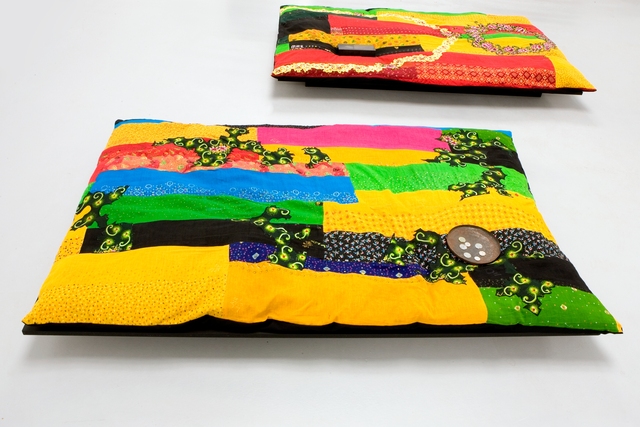 The work Down Under, 2009 presents several objects laying on the floor, which look like colourful duvets. The artist had bought them more than 30 years previously from poor women craft tailors who were doing this for a living. The women, in their turn, were using patchwork techniques to sew together leftovers of fabric or pieces of used textile found elsewhere. Some of the fabrics resemble mourning patterns, and some are reminiscent of peaceful landscapes. The red water pipe grounding the textile introduces a feeling of disturbance, of a violent intervention to the naive and innocent appearance of the handmade installation. Nevertheless, the textile object remains the first colourful stain caught in the viewer’s sight, as the centre of attention, resisting the violence of the industrial object. This work shows the importance of collecting important things, the artefacts, with the aim of researching, saving, protecting, preserving, and rethinking one's own culture.