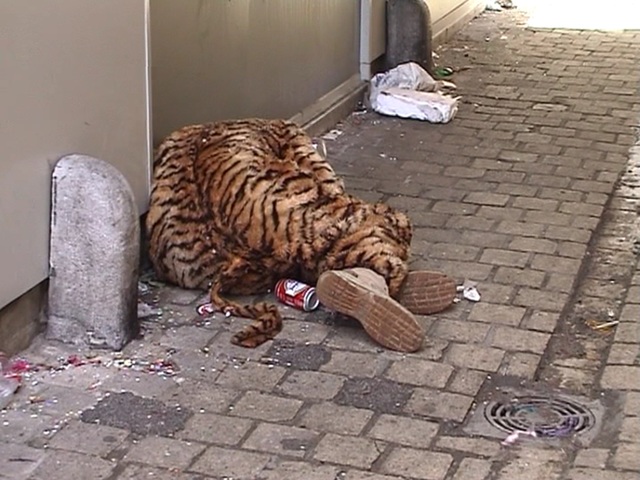 The video Inch’Allah is composed of short, individual film excerpts that are edited together. Pacquée zaps from East to West, between countries including Belgium, Israel, France and Tunisia. Everyday events and impressions of human actions are juxtaposed with each other, from the sometimes carnivalesque life of Northern Europe to the intimate beauty of such regions as Yemen and Morocco. There is no narrative nor hierarchical structure to the images. They are underpinned by a voice-over that includes passages from The Book of Questions (1967) by the French-Jewish writer Edmond Jabès. Like this book, the film is a mosaic of extracts, aphorisms and visual dialogues that revolve around a central question: how can one make the invisible visible?

Inch’Allah is a logical sequel to Pacquée’s earlier work, in which she goes out into the streets to gather images which she then arranges in accordance with formal elements. This gives rise to auditory and visual puzzles with images of lines, colours, shade and light. Random details are combined to make a meaningful whole. This work also revolves around the illusion of an objective reality. Our perception of reality is distorted by the point of view we adopt, by the place we live, the events and images we see and hear, and the sort of life we lead. Pacquée’s intention is to make the influence of this subjective point of view clear. She shows us how separate details and parts can give meaning to a whole. Pacquée advances the idea that life does not necessarily revolve around knowledge and understanding. The way people relate to one another is much more essential. All the rest is just a manifestation of the moment.