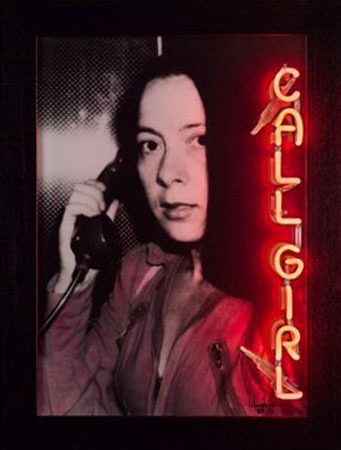 Liliane Vertessen (°1952) has, since the beginning of her career, developed an incredibly personal vision for her work, employing her own outward appearance and basing this vision on photographs that she shapes to her own ends. Her multimedia installations take these aspects as a point of departure. At the root of her work is a pictorial sensitivity, in this way uniting her to an artistic movement that has seen a steady increase to the coalescence of different forms of media.

Vertessen photographs herself in a variety of poses, poses which are erotically charged and highly staged. She experiments with a wide spectrum of those roles in which women are so often depicted: seductress, lady, sex object, prostitute and innocent little girl. These roles are presented for consideration, as objects of both celebration and criticism; however, there is often an element of melancholy that pervades her works. They are reminiscent of images from the past, imbued with poetic intensity and a power that exudes authenticity.

Vertessen regularly combines analogue photography with neon or other elements in her works, thereby embedding the photograph as base into a pictorial experience. Many aspects of her work display similarities to painting: the mise-en-scène, the self-portrait as a subject, or the creative process taking place in the intimacy of the studio may all be seen in light of this tradition.

Despite her frequent depiction of herself as a fighter and someone who puts her own interests first, the truth, nevertheless is that she is and remains an artist who is reserved and remarkably modest. She does very little to catapult herself into the world of art's blinding spotlight.

Liliane Vertessen
There Are Snakes Everywhere…, 2017