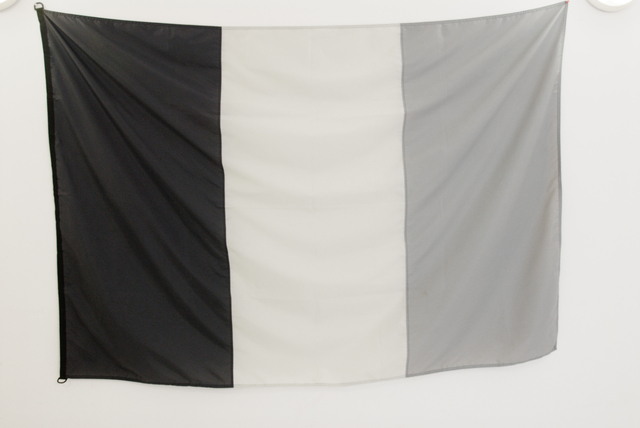 The work Birth of a Nation by Michael Van den Abeele was inspired by his fascination for geographical conditioning. The artist is not so much looking for alternative worlds as attempting to relativise the concept of nationality. He is looking for ways to, by apparently small-scale interventions, deploy the geographical order as a playing field, in which the psychology and magnetism between persons and objects are mapped.

The artist regards the nation as "a social contract, the most authentic thing that a nation has to offer. Believing in ethnic uniformity as a norm for national political truths would only mean burying ourselves in ignorance. Truth can only be circumscribed there where there’s difference, around the impossibility to truly unite. Such a beautiful nation, that perceives itself as a construction, as an imposed social contract between different communities, really has all the resources to achieve or at least approach some kind of universality."

His flag in gray tones suggests the idea of ​​the birth and disappearance of a nation, for bad or for good. The flag does not represent an ideology, but is an individual fantasy. For the work, Van den Abeele turned the colours of the Belgian flag into shades of gray. Thus he lets the country disappear. The flag is like a ghost, as is Belgium, for many people, only a construction, a non-existent country. At the same time, it refers to the revival and disappearance of nationalist structures, of regionalism and universalism.

The title refers to the same controversial film by D.W. Griffith (1915) made in the period immediately after the US Civil War. The roles of black slaves were interpreted by ‘gray people’, white actors painted in black.