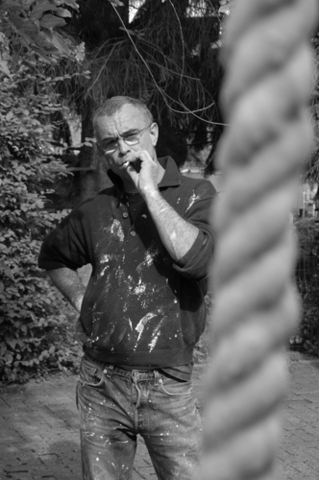 °1956
Born in Sint-Truiden, BE
Lives in Brussels, BE
Visit website

Since 1980, Michel François has developed a hybrid and fluid oeuvre, escaping any categorisation of style and genre. While he claims to be a sculptor, he built his work on all scales and using all media including photography, video and installations. On an artistic level, he was mostly trained by his father, a painter, and his mother, a dancer and sculptor; which can explain his praxis, always halfway between three and two dimensionality, between image and sculpture. After studying theatre at the National Institute of Performing Arts (INSAS), he obtained a diploma at the Graphic Research School (ERG) in Brussels where he later held the position of head of the sculpture workshop. He also collaborated with choreographers and directed the scenography of Mountain Fountain by Pierre Droulers (1995), and The Song (2009 - with Ann Veronica Janssens) and Anne Teresa De Keersmaeker's En attendant (2012). Alongside numerous exhibitions abroad, he participated in Documenta IX in Kassel in 1992 and represented Belgium at the Venice Biennale, with Ann Veronica Janssens in 1999. Since 2009, he has been teaching at the Ecole Nationale Supérieure des Beaux-Arts of Paris.

Michel François’s oeuvre is intimately linked to the living, in all its forms (the human, the vegetal, the mineral, the organic). Like an anthropologist, he collects objects (bottles, strings, pieces of plates, pearls, cans, etc.), materials (ink, clay, water, tissues, pollens, etc.), gestures, attitudes and basic acts (breathing, crushing, shouting, walking, bending, shaping, etc.) in their most ordinary and insignificant aspects, to unleash their strength, emotion and poetry. Despite the extreme diversity of objects, sometimes collected, sometimes manufactured, derived from his daily life or collected during his travels and meetings, it however constitutes a coherent system. Defined as the ‘Bazaar of Existentiality’ by Paul Ardenne[1], the work of Michel François tackles a way of capturing life in its critical and delicate moments. From the real, it takes, moves, confronts, zooms and freezes moments and situations in order to create a sensitive and less dull experience of everyday life.

Designed according to the concept of permanent recycling, reconfiguration and (re) assembly, the works of Michel François are always linked to each other. His exhibitions, photographs, videos, sculptures and installations are always juxtaposed in a different way in order to be more precise about his approach and to go against a fixed concept of art. A material is transformed into a sculpture, which is then taken up in various installations, which become the subject of a video, from which the artist extracts a photograph, which in turn is recovered in another installation and so on. This process is also found in the forms: holes at the elbows of a sweater become eyes, a rectangular opening in an architecture becomes a painting on the wall; an ink-secreting octopus, a Rorschach test; the entrance to a cave, a vagina, etc.

This work in progress, constantly being remodelled, should not be limited to the pleasures of shapes and illusionistic representational games. Michel François’s works show conceptual demand and formal seduction, the radicalism of the gesture and the intelligence of the image, which make his signature recognisable among all. Similarly, the subjects dealt with in his work, if they seem disparate, subtly play with antagonisms and reconcile fields that are often distant and contradictory in the world of art: emptiness and fullness, interior and exterior, consumption and destruction, unity and disorder, action and languor, memory and oblivion, the natural and the artificial, the intimate and the universal, and so on.

Inspired by the teachings of Fluxus, affirming the necessity of a rapprochement between art and life, the art of Michel François is also questioning the value and the permanence of the work of art, somewhat taking a stand against the artistic system. For example, the Bureau augmenté (1998) is a vast installation where everything is connected to everything (press clippings, previous works, rest of small works, etc.); La Sieste, la Réserve, le Monde et les Bras (1991) is a shelf on which various objects are placed (traces of bodies molded in plaster, belt, balls of earth assembled into a rosary, balls of string, which may be left as such, arranged or extracted in the exhibition space according to the choice of the organiser; his photographs converted into a poster, without comment or signature, are regularly distributed to those who wish to take them home).