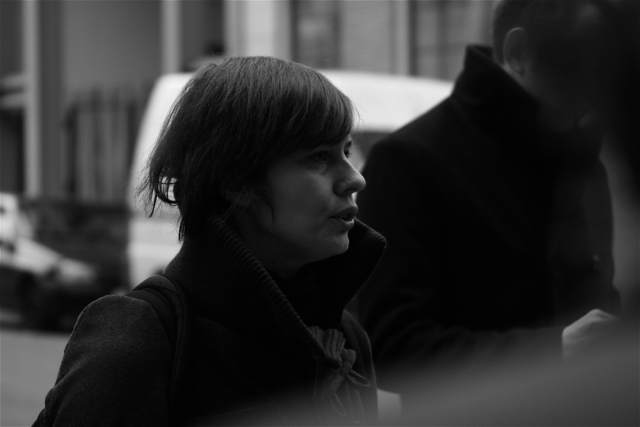 Mira Sanders was born in 1973 in Uccle, near Brussels where she lives and works today, while teaching at the Sint Lucas Institute, in Brussels and Ghent. In 2007, she won the Prix de la Jeune Peinture Belge. Following the discovery of the book Espèce d’espace by French writer Georges Perec, the artist defined herself as a ‘user of space’ and chose to focus her attention on the different forms of urban environments. Questioning the influence of our cultural conditioning on our systems of perception, she explores cities and strives to convey her personal vision in a sensitive way, as well as those of the inhabitants she encounters.

Mira Sanders seeks to highlight the links between the different images she collects along her urban walks. Her artistic approach is constructed in several stages, which she then concretises into an enlarged drawing. First, she explores an urban territory, a heritage city or an industrial city, where she collects testimonies, sound recordings, notes, photos, videos or sketches inspired by architectural typologies and her exchanges with the population. Following these meetings and observations, she developed what she calls ‘mnemonic drawings’, that is to say, ‘reminder drawings’ which allow her to mentally reconstitute the interviews and emotions she had during her walks.

While this multidisciplinary artist accompanies her strolls with photos or audio-visual recordings, in order to keep a ‘memory-image’, she favours drawing to other forms of expression, when it comes to concretizing her work: "For me drawing is the first writing”, she explains. Once her explorations are over, Mira Sanders gathers her sketches and live drawings, and reworks them, before assembling fragments into a vast overall composition that is finally enlarged. "The technique of drawing," continues the artist, "is an exploration of our own knowledge and abilities. It is a search for borders and what is beyond, with the possibility of failure; but also, when everything goes well, with the unexpected as a reward."

Mira Sanders also proposes to see her drawings beyond its artistic approach, as a ‘physical approach’, one of exploring locations and seizing them intimately in all their dimensions, whether architectural, historical, or physical, mental, affective or sentimental. In other words to define a new way of apprehending a living space. She recomposes a fictitious and poetic territory, combining a personal point of view with many sequences borrowed from other people. Her method then seems to be borrowed from anthropological or sociological research, in so far as she crosses her observations with the contributions she receives from the different people she addresses.